Spider-Man Films Wiki
Register
Don't have an account?
Sign In
Advertisement
in: The Amazing Spider-Man 2 Characters, Villains, Males,
and 5 more

Electro (Maxwell "Max: Dillon) is the main antagonist of The Amazing Spider-Man 2. He is a former electrical engineer at Oscorp who had idolized Spider-Man, but was transformed into an extremely powerful living electric capacitor after a freak accident, growing power-hungry and obsessed with defeating and killing his former idol. He was nearly killed by Spider-Man, but was transported to an alternate universe seconds before his death, where he was cured of his abilities, and redeemed himself.

He was portrayed by Jamie Foxx in The Amazing Spider-Man 2 and Spider-Man: No Way Home.

"I wish I was like him, the Amazing Spider-Man!"
―Max before becoming evil[src]

Maxwell Dillon lived a very lonely and unfulfilling life. One day while in the Manhattan area of New York City he, by chance, meets Spider-Man. The hero told him, "You're my guy. You're my ears and eyes on the street." Dillon couldn't believe that such a well known personality had graced him with such kind and encouraging words.

Dillon took the words perhaps a bit too literally and began to see himself as some sort of de-facto accomplice or sidekick to Spider-Man. He goes into a state of obsessively idolizing Spider-Man and making attempts to try and "help" the hero in any way he could.

After his birthday was forgotten by everyone, Max is repairing some electric cables in a shaft and he gets zapped, sending him falling into a vat below, filled with electric eels. The wires he was working on fall inside too. He subsequently emerges walking through smoke, with the outer char breaking off his skin. The mixture of electricity and chemicals causes Max's skin to become blue, and electricity to flow beneath it after a small stage of metamorphosis. He gains the power to manipulate electricity and then proceeds to seek vengeance on the society that shunned him.

He staggered through Manhattan with his new powers an enigma to him and made his way to the strongest electricity source; Time Square. There, he hooks himself up to a power cable and absorbs energy. A police officer approaches him and Electro takes this as a threat. He attacks the policeman before Spider-Man arrives. Electro sees his image all over the screens of the square and is awestruck the he is now seen as somebody. However, he is soon disappointed and angered that Spider-Man couldn't remember his name and, when pushed far enough, becomes hostile.

Electro uses the absorbed power against Spider-Man, the police and onlookers. His electrical attacks destroyed one of Spider-Man's web shooters resulting in a much harder fight for the web crawler. Eventually Spider-Man subdues him and Electro is taken away.

His existence was covered up as much as possible by Donald Menken and he was put into the Ravencroft Institute and was tested upon by Dr. Ashley Kafka. After his stay in Ravencroft, Electro was visited by a desperate Harry Osborn. Osborn proposed a teaming and, after determining that Harry needed him, Electro helps Harry infiltrate Oscorp Tower in exchange for being able to use Oscorp's main power grid.

Electro sucks up virtually all the power in New York, prompting Spider-Man to venture to the grid to confront him. Before leaving, Gwen Stacy shows Spider-Man a way to magnetize his Web shooters so he can better engage Electro. In the ensuing fight Electro gets the upper hand and was about to finish Spider-Man off when he was hit by a police car driven by Gwen.

While Spider-Man drew Electro's attention, Gwen reached the grid overload station to try and use Electro's own power against him. Spider-Man connected some web string between the power cables and Electro used some lightning bolts on him. As he did so Gwen used the override switch causing a massive overload in power which reflected against Electro, causing him to explode.

Doctor Strange tried to cast a spell to make everyone forget Peter Parker was Spider-Man. However, when the spell failed, it connected to other realities in the Multiverse and brought people who were aware of Parker's true identity, one of them being Dillon who was brought from the middle of his overload.

Dillon was found by Spider-Man when he was absorbing energy from some power cables in New York. Dillon attacked Spider-Man, who was aided at the last second by Flint Marko, who had also been transported to this universe. Sandman helped Spider-Man fight Electro by surrounding him with sand while Parker destroyed the utility poles that were feeding him energy, returning him to his normal appearance, albeit slightly different, due to the difference in energy between his universe and the new one.

Parker explained to him that he was responsible for them being there, then used his gauntlet to send Dillon and Marko to the holding cells in the New York Sanctum. He was later forced to join the other villains after Parker freed them in a bid to save them from their intended fate.

Peter Parker's solution to Dillon's condition was to build an energy siphon based on Tony Stark's Arc Reactor technology, which would absorb Dillon's electrical powers and keep him in his normal, physical human state instead of turning back into electricity, but Dillon was drawn to the energy given off by the Arc Reactor. Dillon came to enjoy this new universe, believing he could be more there than he was back home, and with prodding by Green Goblin, decided he doesn't want to lose his powers and escaped, taking the arc reactor to enhance his powers.

Peter Parker, along with two other Spider-Men from alternate universes, one of whom was the Spider-Man from Dillon's universe, lured the villains to a final battle at the Statue of Liberty. During the fight, Dillon's enhanced powers allowed him to battle all three Spider-Men at once.

Otto Octavius intervened in the final battle, tricking Dillon into thinking he was once again Doctor Octopus, only to use his arms to remove the arc reactor and attach Dillon's cure to him, restoring him to normal. Once returned to normal, he seemingly lets go of his hostility towards his Spider-Man, acknowledging that he's helped a lot of people, and lamenting that all he wanted was to be noticed, having to dig his way from the bottom to have a sustainable job. Dillon and his Parker were sent back to their universe after Doctor Strange cast a spell that erased everyone in that universe's knowledge of Spider-Man's identity.

At the beginning, Max was an awkward and lonely man who longed to be acknowledged and appreciated by people. He is constantly pushed around by those around him, with his superiors stealing his plans for the new power grid, leaving him to constantly feel powerless. These experiences led to Max repressing a great deal of anger, one instance in which he imagines violently berating his boss for not believing that the power grid’s designs were his and jokingly claiming to be Spider-Man. After Spider-Man saves Max’s life, along with giving him a pep talk to boost his confidence, Max, finally feeling as though someone acknowledges him, begins to idolize him to an almost obsessive level having a shrine dedicated to him in his room.

After his transformation into Electro, Max was initially scared and confused, not understanding what was happening to him. Once entering the city, he is mesmerized with the sight of his face broadcasted all over city, believing that now people finally “see” him. This is short lived as Spider-Man unintentionally steals the spotlight, resulting in all the resentment and rage inside Max to boil over as he attacks his former idol who he felt betrayed him. At this point, Max has fully accepted his transformation into Electro, and is no longer the meek man he once was, now boasting a much cockier and more arrogant attitude. He vows to get back at the world who took so much from him, and to show them what life will be like with only him and no Spider-Man.

Upon regaining his human body after being transported to a different universe, Max becomes more stable and calm. However, he begins to crave the energy of the universe he's in. This, along with the urging of the Green Goblin, makes him shake off Peter's idea of a cure for him and fights back. Upon being cured by Doctor Octavius and the Spider-Men, Max becomes saddened by the fact that he has become a nobody again. However, his spirits were lifted by his universe's Spider-Man, to whom he exchanged a good conversation with. 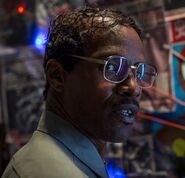 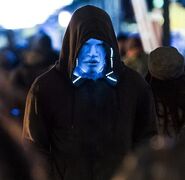 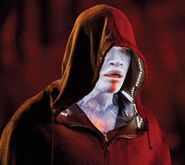 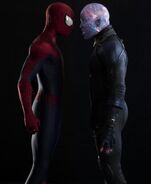 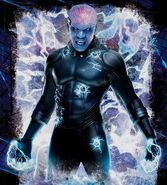