"You don't give people hope, you take it away! Now I'm gonna take away yours!"
―Harry to Peter as The Green Goblin[src]

Green Goblin (Harry Osborn) is the secondary antagonist of The Amazing Spider-Man 2. He is a fictional character in the Marvel Comics Universe created by Stan Lee and Steve Ditko in 1965. He is portrayed by Dane DeHaan.

Harry Osborn is the son of the wealthy industrial scientist Norman Osborn, the founder of Oscorp Industries, and carrier of a fatal illness. Harry is also an old friend of Peter Parker. Around the time of Peter's parents disappearance, Harry was sent to a boarding school by his father. He returns to New York and meets with Peter for the first time since then at the time Peter graduated from High School.

Harry returns to New York to see his father Norman, the C.E.O. of Oscorp Industries. Norman explains his illness is hereditary, and Harry is at the age where it first develops. Before he dies, he gives Harry a small device which he claims contains his life's work. The next day, Norman dies and Harry is appointed the new C.E.O. of Oscorp, only to become disruptive to Norman's assistant Donald Menken and the Oscorp board, causing them to plan on deposing him.

The first symptoms of Harry's illness show, and he uses the device Norman gave him to deduce that Spider-Man's blood could help save him. He asks Peter, who has been sending photos of Spider-Man to The Daily Bugle, for help finding Spider-Man. Peter appearing to him as Spider-Man refuses, unsure of what effects the transfusion would have. This only further drives Harry into depression and frustration. Harry's assistant Felicia Hardy informs him of equipment that could help him. When attempting to access it the Oscorp board members frame Harry for covering up employee Max Dillon's accident, and remove him from his position as C.E.O.. Harry infiltrates Ravencroft and makes a deal with Max (now calling himself "Electro") to get him back in to the Oscorp building. Inside, he finds a suit of armor and other equipment made by Norman, as well as venom from the now destroyed spiders, which instead causes him to transform into a hideous goblin-like creature.

Later, the transformed Harry arrives equipped with Norman's armor and weaponry; upon seeing Gwen, Harry quickly deduces Spider-Man's true identity and, wanting revenge for being refused the blood transfusion, kidnaps Gwen Stacy. He fights Spider-Man at the top of a clock tower, and while Spider-Man manages to subdue Harry, Gwen falls to her death.

Five months later, Harry has been imprisoned in Ravencroft, now appearing to be shifting his normal and grotesque forms at random. Harry talks with the Gentleman, Gustav Fiers, about forming a team of super villains equipped with Oscorp's technology with its first suggested member being Alexei Sytsevich. 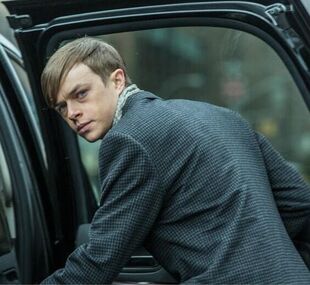 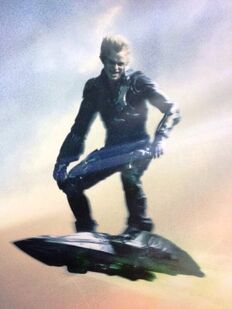 Harry as the Green Goblin. 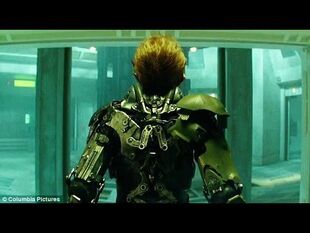 Harry getting into the green goblin suit 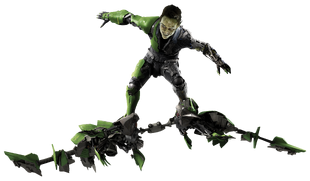 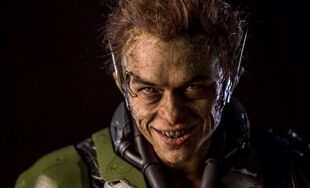 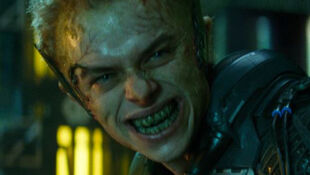 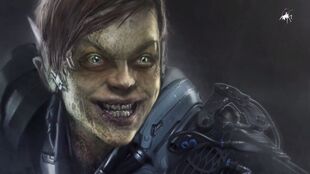 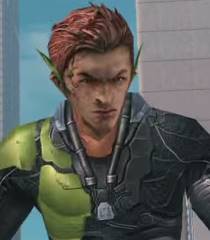 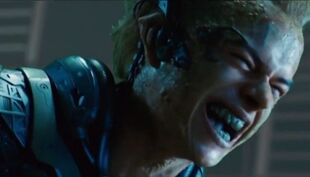 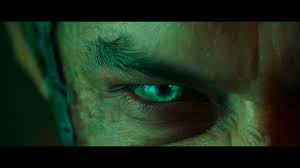 The eye of Harry Osborn turning into the Green Goblin.
Add a photo to this gallery

Retrieved from "https://spiderman-films.fandom.com/wiki/Harry_Osborn_(Dane_DeHaan)?oldid=19014"
Community content is available under CC-BY-SA unless otherwise noted.