View source
watch 01:36
We're Getting Mutants in the MCU - The Loop
Do you like this video?
Play Sound

"I should never have hurt you. Said those things."
"None of that matters, Peter. You're my friend."
―Peter Parker and Harry Osborn[src]

Harold "Harry" Osborn was the son of Norman Osborn, best friend of Peter Parker and former head of Oscorp. After blaming Spider-Man for his father's death, he became the New Goblin. He was portrayed by James Franco in Spider-Man, Spider-Man 2 and Spider-Man 3.

Harry Osborn was born to a wealthy family his mother apparently died soon after his birth.

He had flunked out of the many private schools his father had sent him to public school and wished to have his wealth and privilege downplayed to his new classmates. He constantly tries to impress his father Norman Osborn, a rich industrialist, who is very invested in his work having little time for his son

Harry grows jealous of Peter's relationship with him as Norman admired Peter's intelligence and work ethic. Harry starts a relationship with Mary Jane Watson whom he finds attractive. He is aware Peter does as well and after he finds out attempts to justify himself saying that Peter never made a move, though she eventually falls for Peter. Harry eventually manages to somewhat mend the relationship he has with his father.

Finding Out Who Spider-Man Is

Otto's experiment failed and the company loses millions as a result. Harry was saved by Spider-Man in the disaster but still continues his vendetta. Ever the more bitter, Harry lashes out on Peter, for being the 'son' Norman wanted, defending Spider-Man, and stealing Mary Jane. Later, he forms an alliance with Doctor Octopus to get his revenge, providing Octopus with a rare element, tritium, that he needs to complete his fusion reactor in exchange for Octopus capturing Spider-Man.

Doctor Octopus brings Spider-Man back to Harry, who unmasks him in preparation to kill/assassinate him. He is shocked to see that Peter is in fact Spider-Man, but nevertheless tells him where Doctor Octopus is hiding. Afterwards, he begins to hallucinate, seeing his father's image in a mirror who demands that Harry avenge his death. He refuses to do so and, after being chastised for his weakness, smashes the mirror only to find a hidden room concealed behind it. The room contained all of Norman's Green Goblin equipment and serum, which Peter had hidden when he brought his body back after his death. This discovery led Harry to realize that his father was the infamous Green Goblin.

Around six months after he discovered Peter was in fact Spider-Man thanks to his capture by Doctor Octopus. Encouraged by another hallucination of his father in a mirror he attempts to take revenge, attacks Peter during a fight wearing a modified version of Norman's Green Goblin suit and jet glider. Peter tries telling Harry that he wasn't responsible for his father's death, but Harry refuses to listen. As a result of the head injury he suffered in their subsequent battle, he briefly sustains a case of immediate amnesia.

While in this state, he reverted back to how he was before his father's death. After regaining his memory, due to the efforts of his father's ghost, he attempts to destroy Peter by sabotaging his relationship with Mary Jane and then claiming that she left Peter for him, only for Peter — falling increasingly under the influence of the black suit — to viciously attack Harry in his penthouse, throwing one of his own pumpkin bombs back at him and scarring the right side of his face.

Later Mary Jane is captured by Venom and Peter, free of the black suit's influence, returns and asks Harry to help him for Mary Jane's sake. Harry refuses and Peter leaves. However, after learning the truth, that his father's death was his own doing and not Peter's, from his butler Bernard, he decides to help Spider-Man save Mary Jane from Venom and The Sandman.

In the ensuing fight Harry ultimately sacrifices himself to save Peter during the ensuing fight/battle, Harry is stabbed to death by his own glider on the stomach by Venom, much to the horror of Peter. Harry ultimately forgives Peter for what happened to his father and the two reconcile. Harry dies after the pair's defeat with both Peter and Mary Jane by his side, not before declaring that he and Peter are best friends. Peter and Mary Jane, both heartbroken by their friend's death, attend Harry's funeral together along with Bernard the Butler, Gwen Stacy, Aunt May and Flash Thompson.

When his father Norman is transported to an alternate universe, he discovers Oscorp does not exist, and neither does his Harry, and goes to F.E.A.S.T. lost and looking for a way back home.

Ned Leeds asks Peter if he ever had a best friend, prompting him to say Harry was the best friend he ever had, despite trying to kill him, and died in his arms having sacrificed himself to save him. This prompts Ned to tell his version of Peter Parker that he promises not to turn into an evil villain and try to kill him much to Peter's amusement.

His father is later cured by Peter Parker, allowing him to return to his home universe safely without being destined to die fighting Spider-Man. This creates a new timeline in which Harry will presumably survive due to no motivation to go after Spider-Man.

After exposing himself to the Human-Enhancer Formula, Harry gained superhuman strength, agility, reflexes, durability, stamina, senses, as well as healing, all comparable to Spider-Man himself:

Harry on the field trip.

Harry at home, in spectacles. 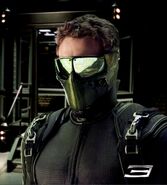 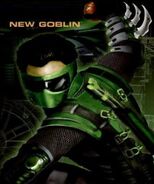