Hoffman works for J. Jonah Jameson at The Daily Bugle.

His first appearance wasn't until after they heard that New York City had a new superhero: Spider-Man. And, at The Daily Bugle, Hoffman tells his boss Jonah him that they had a page 6 problem because they double booked the page so two companies have 3/4 of it but, whilst he is explaining the situation, Robertson tells Jameson they sold out 4 printings because of the Spider-Man photo on the front.

So Jameson decides he needs to hire someone who will take better 'decent' photos of Spider-Man to use as his front pages and tells Hoffman [in response to his problem] to move them to page 7 but Hoffman tells his boss there is a problem with page 7. Jonah fixes this by giving them 5% off and by moving page 8 - Hoffman tells him this can't be done but Jameson yells at him to get out so he does.

He was later seen after the first fight between Spider-Man and The Green Goblin at the festival and Jameson tells him to copyright 'Green Goblin' as he wants a quarter every time someone says it. Hoffman then suggests 'Green Meanie' to which Jameson doesn't reply, he just points to the door for Hoffman to leave.

After Jameson's office was attacked by The Green Goblin who was looking for the photographer taking the photos of Spider-Man, Hoffman dropped his files and ran for cover. He wasn't seen again after that until the next movie. 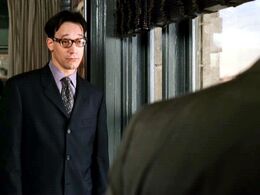 He wasn't seen until after Jameson is about to fire Peter for bringing him some boring picture instead of photos of Spider-Man like he did 2 years ago. This was after Peter told him that he couldn't do that anymore since he was the one who told the city that he's a menace in the first place.

After Jameson found a headline by saying 'Food Poison sweeping City', Hoffman was confused and said "Some Food got Poisoned?" which Jameson replied 'Yeah, I'm a little nauseous.'

He was later seen after Jameson found that heard a scientist had turned evil he then asked Hoffman what they should call the villain. In response Hoffman suggested 'Doctor Octopus' but Jonah put him down quickly by calling it crap, next he suggested 'Science Squid' which Jonah also said was crap. Finally, he proposes 'Dr. Strange' to which Jonah says 'That's pretty good - but it's taken!' In the end, Jameson decides to name the villain: Doctor Octopus (aka Doc Ock for short) under the pretence it was his idea and, unable to argue with his boss, Hoffman, defeated, says he likes it.

Later he seen after Peter gives up for being Spider-Man (Spider-Man no more) and Hoffman sees his boss dressed up as Spider-Man in his office alone with the blinds closed. After Peter got his power back, Hoffman told his boss that they needed Spider-Man more than ever since he was the only one who could beat Doc Ock. He was also there when Peter retrieved his costume back from the Bugle where it was pinned up on the wall. He was last seen when he was with his boss and his boss' son helping to find John's fiancée Mary Jane Watson after the final battle of Spider-Man and Doc Ock.

He was seen that he have a meeting with his boss about new change for the Daily Bugle with a new slogan of 'Daily Bugle, It's hip It's now It's wow and How!'. This meeting was whilst Jameson was supposed to take his pill and Betty Brant interrupts to remind Jameson using a loud buzzer, he then tells Hoffman to continue. Jameson is then next seen yelling at Hoffman to get out of his office as it is the dumbest idea he has ever had. When both Brock and Parker want a staff job, Jonah asks if anyone cares about what he wants - this is when Hoffman enters the office and says 'I do' to which Jameson tells him to shut up and get out.

Retrieved from "https://spiderman-films.fandom.com/wiki/Hoffman?oldid=18122"
Community content is available under CC-BY-SA unless otherwise noted.