"I spent my life as scientist trying to create a world without weakness, without outcasts. I sought to create a stronger human being but there's no such thing, human beings are weak, pathetic, feeble minded creatures. Why be human at all when we can be so much more? Faster, stronger, smarter, this is my gift to you!"
―Curt Connors[src]

Lizard (Dr. Curt Connors) is the main antagonist of The Amazing Spider-Man. Rhys Ifans portrayed the character in the The Amazing Spider-Man and Spider-Man: No Way Home. A brilliant geneticist who worked for Oscorp, he intended to use his research to provide means of regeneration for those who lost limbs, but his serum ended transforming him into a monstrous, mutated lizard.

Dr. Curt Connors is a biologist for Oscorp and the former partner of Richard Parker where they worked together on combining several desirable physical attributes of animals with human beings to improve health, including restoring his own amputated right arm. Years later, Richard's son Peter starts a mentorship with him after he finds some of his father's hidden notes that contain a critical equation necessary to make a crucial breakthrough.

When the representative of Oscorp C.E.O. Norman Osborn, Dr. Rajit Ratha fires Connors after he refuses to rush into human trials unprepared, Connors experiments the chemical on himself and next morning finds that he has regenerated his arm. Learning that Dr. Ratha is on his way to the VA hospital, Connors leaves to intercept him, but it quickly becomes apparent that his "cure" is doing more than was intended as his skin grows scaly and claws sprout from his fingers. By the time he gets to the traffic-jammed Williamsburg Bridge, Connors has transformed into a super humanly strong humanoid lizard creature where he tossed some cars over the side.

Spider-Man shows at the scene and manages to save each fallen car with the bio cable "web" that he fires from devices he built on his wrists. The Lizard escapes into the sewers and transforms back into Connors, but it's clear that the chemicals have deeply affected his mind, creating an obsession with his new abilities and making him see it as biological "perfection". He continues further, experimenting on himself in an makeshift lab. Peter, who has come to suspect Connors as being the reptilian creature who attacked the bridge, confronts The Lizard in the sewers, barely escaping with his life, though Connors learns of Spider-Man's true identity as a result.

The Lizard attacks Peter at his school. Unsuccessful The Lizard then develops a plan to turn all humans lizard-like, starting with the release of a chemical cloud from Oscorp's tower. The police hunt both Spider-Man and The Lizard simultaneously. Spider-Man eventually disperses an antidote cloud restoring Connors and his reptilian victims back to normal, but not before The Lizard mortally wounds Captain George Stacy. With his sanity restored to him, Connors then proceeds to save Spider-Man from falling off a building using the rest of his quickly dissipating lizard strength. Afterwards, he surrenders himself to the authorities and is arrested for his crimes.

In a scene after the end credits, Connors (who has been placed in Beloit Psychiatric Hospital) appears to speak with a mysterious man who asks if Connors told Peter the truth about his father. Connors replies that he didn't, but also demands that he leaves Peter alone. The man then mysteriously vanishes. It is also hinted that he may still have some form of the lizard serum left in his system.

Connors was mentioned twice by Harry Osborn. Harry first mentioned him stating "people were pissed off because he tried to turn everyone into giant lizards". The second time was when Harry is trying to convince Peter to ask Spider-Man to give him a blood sample in order to cure his retroviral hyperplasia. When Peter tells him about what happened to Connors, Harry tells him Connors was weak, and that he could handle it.

At some point from before he was cured, the Lizard was transported to another universe after a spell casted by Doctor Strange goes haywire. Connors hid in the sewers until he was confronted by Strange and transported to the Sanctum Sanctorum and locked inside a dungeon. Later on he would reunite with Max Dillon as they were both workers in the Oscorp Industries. Eventually he, Dillon and three other villains from a third separate universe would be released from imprisonment by the Peter Parker from the current universe in order to help cure the villains from their destructive powers and to spare them from dying by Spider-Man in their universes before "going home". All the villains except Connors would group in Happy Hogan's apartment while he remained in a F.E.A.S.T truck.

Shortly after Green Goblin battles Peter, Connors finds an opportunity to escape the truck and join the fight before escaping along with the other villains. He would later join Dillon (as a reformed Electro), and Sandman in a final battle with three Spider-Men, one that was originally from the same universe. The Peter Parker from his universe developed the cure he made before to cure Connors and with the help of the other Spider-Men was able to cure him once again. When the Green Goblin collapsed the scaffolding that they were fighting on, Connors nearly fell to his death before he was caught by the Spider-Man from the Goblin's universe. Later, Dr. Strange casted a new spell that made everyone forget his universe's Peter Parker and sent everyone from another universe back home, including Connors.

In the video game

In the 2012 video game, Dr. Connors is a supporting character, assisting Spider-Man and Gwen Stacy against the machinations of Alistair Smythe and his army of S-Bots in the wake of an outbreak of cross-species hybrid test subjects. Near the end of the game, Connors is forced to reinject himself with his serum and become the Lizard once more in order to fight against Smythe. However, due to the mental regression, the Lizard ends up being the final boss of the game. After his defeat, he reverts back to Connors, and willingly returns to his sentence.

Artificially Enhanced Physiology: Connors transformed himself into a giant mutant lizard after experimenting with cross-species genetics; he harnessed the DNA of a lizard and transferred its capabilities to himself, granting him enhanced reptilian physical attributes. 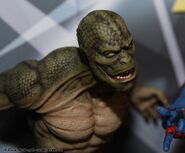