View source
watch 01:36
We're Getting Mutants in the MCU - The Loop
Do you like this video?
Play Sound

"What is like being famous when nobody knows it's you? It's crazy. Should we tell everyone?"
―Ned Leeds to Peter Parker[src]

Edward "Ned" Leeds but also Teasley known as the Hob Goblin to most curious fans, is a supporting character in Marvel Comics’s Spider-Man series. The character was created by Stan Lee and Steve Ditko in 1962. He is portrayed by actor Jacob Batalon.

Ned Leeds is a student at Midtown School of Science and Technology, and Peter Parker's best friend. He was also a member of the Academic Decathlon Team. At school, Leeds told Parker that he had got the Lego Death Star, and asked Parker if he wanted to help build it. Parker declined, saying he needed to work on the Stark Internship.

Shortly after, Leeds went to Parker's apartment. While Parker was not in, his Aunt May allowed Leeds to wait in his room. Leeds saw Parker enter through the window while wearing his Spider-Man Suit. He surprised Parker, who had to admit that he was Spider-Man.

Over the next few days, Leeds bombarded Parker with questions over his abilities, and whether he had met other heroes like Captain America. Parker answered the questions, but became frustrated when Leeds blurted out in front of Liz Toomes that Parker knew Spider-Man. When they both got invited to her party, Leeds convinced Parker to make an appearance as Spider-Man to increase their social standing. Leeds was left waiting at the party when Parker had to bail to investigate an explosion that turned out to be an arms deal.

After breaking up the arms deal, he discovered a power core. Leeds helped him to investigate it and saw that the alien core had been grafted to human technology. They avoided Herman Schultz who was tracking the power core and looking to recover it.

Leeds joined the Academic Decathlon Team in Washington, D.C. for the finals. Parker was using the trip to investigate the Vulture, a villain who was responsible for the creation of the hybrid alien-human weapons. Leeds disabled the tracker inbuilt in the Spider-Man Suit that relayed his location to Tony Stark's assistant, Happy Hogan. Parker told Leeds to look after the power core and keep it safe.

Parker ended up being trapped in a D.O.D.C. Vault and missed the finals the next day. Leeds participated in the finals, and the Midtown team won. Mr. Harrington took the team to the Washington Monument. At the top, the power core exploded, damaging part of the Monument and trapping several of the Academic Decathlon in an elevator. They were rescued by the arrival of Spider-Man.

At the homecoming dance, Parker found out that Liz Toomes' father was the Vulture. Later, when Shocker gained the upper-hand against Parker, Needs intervened and distracted Shocker with one of Parker's web shooters, giving Spider-Man the advantage to web him against a bus. As Parker went after the Vulture, Leeds got his wish to be his "guy in the chair," using several computers in the school to help Parker in his mission. After Parker had defeated the Vulture, Leeds was caught by Ms. Warren, one of the school's teachers. To cover for Parker, he told Warren he was looking at pornography. 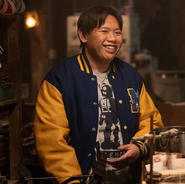 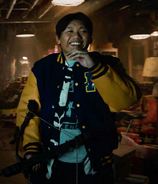 Ned as The Hob Goblin