Pumpkin Bombs are grenades used as a weapon by the Green Goblin.

The pumpkin bombs deploy from the weapons arsenal of the Goblin Glider. The bombs are used as flying explosive grenades. During his first appearance in the film, Goblin attacks Oscorp's Unity Day Festival, throwing a pumpkin bomb below a balcony that collapses as soon as the windows from the building explode. He also throws another bomb, this time a flash bang which vaporizes people, leaving only their bones to fall down.

During the second half of the final battle when Goblin throws Spider-Man into an abandoned building, he throws another pumpkin bomb which explodes in front of Peter's face, slicing half of his mask and sending him flying through a wall.

Harry Osborn uses his father's pumpkin bombs when he becomes New Goblin. Harry, during his fight with Peter in his mansion, sends them both flying though the glass mirror and into the Goblin Lair. After the Sky-Stick knock's Harry into a glass shelf containing pumpkin bombs, Harry throws one at Peter but Peter, under the influence of the black suit, uses his webbing to deflect the attack and throws it right back at Harry. The bomb is thrown right next to Harry and explodes, scarring the right side of Harry's face.

Later during the climax, Harry arrives at the construction site to save Spider-Man and Mary Jane Watson from The Sandman and Venom. He uses a pumpkin bomb on Sandman which explodes and causes Sandman to collapse back into human form. Spider-Man later uses one to destroy the symbiote that possessed Eddie Brock. Eddie attempts to save the symbiote by re-bonding with it but is killed in the explosion along with the symbiote.

In the fight with Spider-Man, Harry uses a pumpkin bomb which forces Spider-Man to leave the web holding Gwen. Spider-Man shoots another web at her, which cuts between the gears of the Clock Tower. Spider-Man shoots a third web at her but before he can pull her up, Gwen hits the ground, causing her death. It is unknown if the bombs come from his glider. 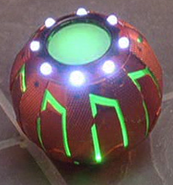