Spider-Man Uniform is a superhero suit used by Peter Parker to protect his identity.

Originally, Peter Parker wore a homemade suit consisting of red and blue clothing such as a blue pants with a red hoodie over the top with the cut-short sleeves and a black spider on the chest, red fingerless gloves with black webbing designs on them and black goggles to fight crime in New York City. Peter hid this suit from his aunt May by hiding it in a loft above his room which came down on a rope whenever someone opened it. When Tony Stark figures out that he is Spider-Man, he then told Peter that he is needed an upgrade, constructing a new-and-improved suit.[1] 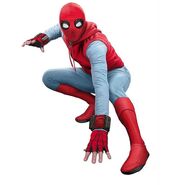 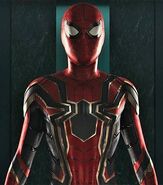 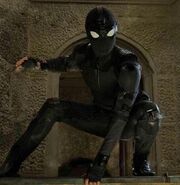